Have a book from Iceland to recommend? Use the submission form.

When I was in Iceland, I heard many surprising statistics about the country’s literacy. Despite their relatively small populations, Iceland and St. Lucia rival each other for the country with the most winners per capita for the Nobel Prize in Literature. According to some reports, one in ten Icelanders has published a book. Here I’ve whittled down the best books from one of the world’s most literary countries. (This is by no means a definitive list and your recommendations are welcome.) 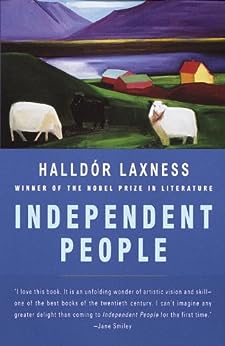 No lesser than Annie Proulx names Independent People (Sjálfstætt fólk) as one of her top ten favorite books of all time. Laxness’s epic about Icelandic farmers took home the 1955 Nobel Prize for Literature for its “vivid epic power, which has renewed the great narrative art of Iceland.” (Recommended by H.E. Geir H. Haarde, Icelandic ambassador to the U.S., in CN Traveler.)