Have a book from Colombia to recommend? Use the submission form.

Looking for a good book to read while you visit Colombia? Check out my list of books about Colombia and by Colombian authors.

For some reason, Simón Bolívar is virtually unheard of in the U.S., despite being the most famous South American in all of history. Known simply as El Libertador (The Liberator) across the continent, Bolívar helped Gran Colombia (today comprised of Venezuela, Colombia, Ecuador, Peru, Panama, and, his namesake, Bolivia) gain independence from Spain, then went on to become its first president. Although his dreams of pan-American were never realized, his legacy can be felt throughout the continent even today. No less than Walter Isaacson hailed the book, saying it “reads like a wonderful novel but is researched like a masterwork of history.”

Colombia: A Comedy of Errors

Although written as a humorous primer of Colombian’s history and culture, this illustrated book provides a solid background on most every aspect of life in the country — government, religion, you name it. While you may have a hard time finding it now, the book did exceedingly well upon its release, becoming a bestseller within a month of publication. Per one Amazon reviewer: “There is probably no better English introduction to the history and culture of Colombia right now.” So don’t give up hope in your search for a copy!

Set in Bogota during the 1980s, a time when much of the country was under the stronghold of drug cartels, Restrepo’s acclaimed book follows four main characters, each mentally battling with the insanity of a culture overrun with violence and corruption. As one of the country’s most prominent contemporary writers, Restrepo has won numerous literary awards and is known for weaving in the theme of tragedy into her works while also drawing heavily from the genre of detective fiction.

Killing Pablo: The Hunt for the World's Greatest Outlaw

As much as Colombians want to put the past behind them, there’s no denying that druglord Pablo Escobar had a huge impact on the nation during his reign of terror. The author of Black Hawk Down spins another riveting tale, this time recounting Escobar’s rise and 15-month manhunt leading up to his fall. There are numerous biographies of Colombia’s most notorious man — including one by his son — but Bowden’s stands out for the level of writing and his unprecedented access to such figures as former president Cesar Gaviria and Colonel Hugo Martinez, head of the special police unit that pursued Escobar. One Hundred Years of Solitude

Chile‘s Isabel Allende may be the most widely read Spanish-speaking author, but Gabriel Márquez isn’t far behind. Almost of his books, most of which delve deeply into magical realism, are a fine place to start, but One Hundred Years stands out due to its recognition as one of the most significant works in all of the Spanish literary canon. (Recommended by H.E. Juan Carlos Pinzón, Colombian ambassador to the U.S., in CN Traveler.) 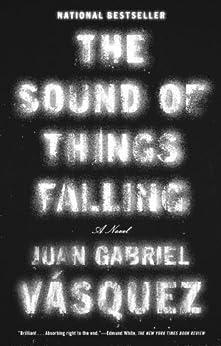 The Sound of Things Falling

One of the most notable writers in all of South American today, Vásquez has won and been nominated for numerous literary awards, although this is probably his most acclaimed. The novel kicks off with Antonio Yammara reading an article about a hippo escaping from Pablo Escobar’s former zoo (the wild hippos of Colombia have become a real-life tourist draw), which draws him back to the days when the drug lord ruled over the country with an iron-clad fist. As I write this summary from Bogotá, it’s hard to imagine Colombia being as violent as in Escobar’s time, but Vásquez brings those all-too-real moments to life in a way that makes you appreciate how far the country has come.