I’ve been hearing about the quaint little burg of New Hope for years, but something has always seemed to get in the way of my visiting. Not so this time. With no boss bellowing for me to return to a prison-like cube and five months to spend on the East Coast, I finally got to visit one of the cities that Forbes Traveler recently named one of America’s Prettiest Towns.

With niblings in tow, I packed up Eartha Kitt and set my GPS for New Hope, population 2,252 (per the 2000 census). We planned to spend the day strolling charming boutique-lined streets, taking in the autumn foliage, and then heading to Shady Brook Farms for some pumpkin and apple pickin’.

I’d expected New Hope to be charming, but I didn’t quite anticipate its unique hybrid of historic cuteness and hip anti-conformism. The first indication that we wouldn’t be greeted by minutemen and Betsy Ross wannabes came in the form of a surreal statue, which the niblings and I deemed a cat on acid. It has ears like a cat and a rather cat-like posture, if said cat were having its ass scratched, so high was its overly elongated tail in the air, but there was also something inherently un-catlike about it, something less whimsical Seuss and more opium-smoking Poe. (If anyone has any idea what this animal is actually supposed to be, please tell me. We’re dying to know.)

After taking a few pictures with the un-cat and the un-cat’s bunghole, we moved on down the street to the canal museum, unmanned and amusingly tiny. We took a gander at the mule-less canal, now choked with duckweed and cattails as it undergoes renovation. Quentin, remembering what he’d learned about canals from our Toronto trip, impressed me by pointing out the locks.

The first few shops we encountered were closer to the New Hope of my mind, including a year-round Christmas store and a handmade purse boutique, complete with punny name (The Bag Lady). We perused a bit but soon grew bored with a holiday too far off to provide any instant gratification. As we ambled lazily down the sidewalk, we had a bit of a shock when a woman, her hand covered in her own blood, streaked past us, her eyes glazed with fear. I spun some story to ease the kids’ own fright, then kept walking, only to run into the same woman emerging from a restaurant moments later, her hand still dripping scarlet. This time, I decided to be more of a role model and told her to take a deep breath before asking if she needed me to call 911 and reminding her to apply pressure. But apparently my heroism was a little late, because a moment later the restaurant manager came out with cloths for her to press against her wound.

I hurried the kids along, trying to divert their minds from the pre-Halloween gore by pointing out the lush foliage, distinctive architecture, and the Mansion Inn (after my trip to Newport and, most notably, Belcourt Castle, “mansion” seemed a misnomer for this comparatively teensy dwelling). We finally found a worthy distraction in a medieval-themed store brimming with suits of armor, metal brassieres, and swords taller than my nephew. Although the prices were more than reasonable (a hand-crafted knife for $20!), I decided against buying weapons for children and instead took them to gaze at the horrific display of Chucky-inspired gore in the window of an adults-only store. Much more appropriate.

That’s what shocked me most about New Hope. Although it’s steeped in history and the arts — every other shop at the far end of Main Street was an overpriced gallery — New Hope definitely has a kinky, non-comformist side. Now that I’ve seen it myself, I realize that’s probably what my friends were trying to convey when they gawked about my never having visited, especially since the town seemed “made for me” and “right up my alley.” There were at least three stores that the niblings wouldn’t be able to enter for at least another eight years, and several more that probably should have had similar warnings.

Luckily, their favorite stop turned out to be Farley’s Bookshop, an independent seller with the requisite creaky floors and even a feline mascot but, sadly, no musty old books for me to pine over. After buying reading material for the kids (Fablehaven for Carly, another edition of Captain Underpants for Quentin) and skipping rocks on the banks of the Delaware in the shadow of passing paddleboats, we decided to ditch our historic train ride so we could spend the maximum amount of time on the farm, whose website promised all sorts of autumnal fun.

We should have done the train ride. Shady Brook Farms was, let’s just say, a tad disappointing. If the admission fee had been more than $10, I probably would have asked for — no, demanded — my money back. The haunted house was little more than a gross-out fest, far less frightening than it was nauseating (thanks in part to a toilet full of poo in the blood-splattered bathroom). Only two of the big-kid carts on the SPF 500 Racetrack worked, and with no one to monitor the gaggle of children, I practically had to yank off two cart-bogarting kids so my dear, sweet, patient niblings could have a turn. The corn maze had terribly marked “clues” planted about, and because it too was unmonitored, we could easily still be in there if I hadn’t cheated our way out, since no one saw us enter and the sunlight was rapidly fading. Even the hayride… wasn’t. There wasn’t a straw of hay to be found on the tractor ride to the pumpkin patch. The upside is we did leave with decent pumpkins, and the pig and dachshund races (video below) were delightful, if only because Carly got chosen to wave the checkered flag and act like a starting bell at the beginning of each race.

The kicker came when we went to go apple picking, which Quentin had been waiting for all day. It took nearly half an hour to find the unmarked orchards, even though they were only a quarter mile and two turns away. For those looking, it’s a right at the mailboxes (not the stoplight), through the drive between the two white buildings, down the dirt road to the left, and conveniently located next to an apiary. Yes, a whole swarm of beehives. Very convenient for pollinating apples, but not very convenient for picking them. As seemed to be the theme of the day, the orchard too was unmonitored, so we had no one to ask what we could pick or where we would pay. So we simply left, leaving Quentin feeling unfulfilled. Damn you, Shady Brook Farms!

I bet if you ask the kids a year from now what they remember most about the trip, they’ll say the bloody-armed woman, the toilet of horrors, and the pig races. Such is the mind of a child. At least, that’s what stands out to me. 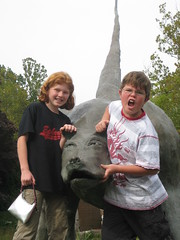 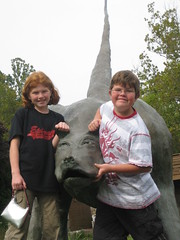 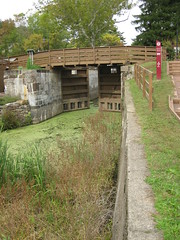 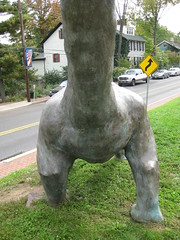 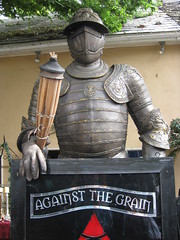 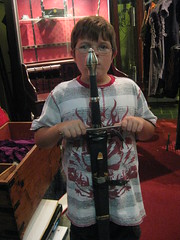 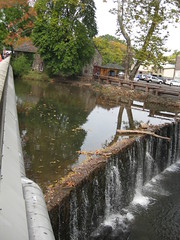 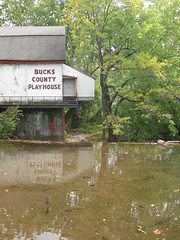 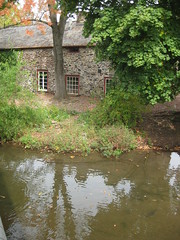 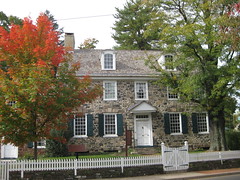 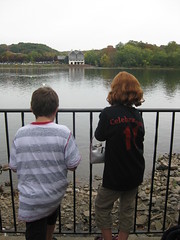 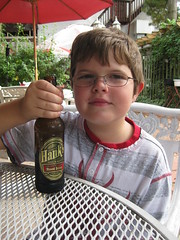 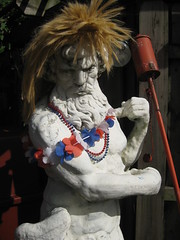 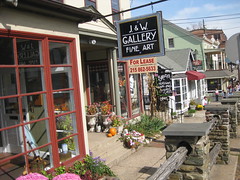 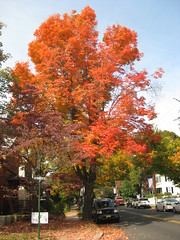 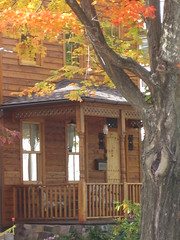 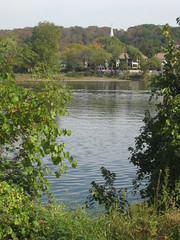 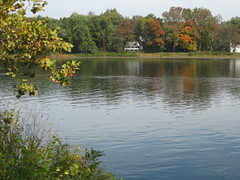 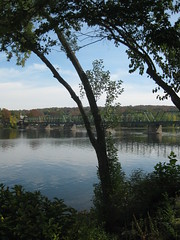 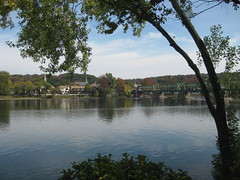