About two years ago, I accepted a friend’s offer to accompany him and his pals on a
kayaking trip on the Colorado River. Less than an hour into the trip, I’d fallen on a slippery rock and ended up with a hairline fracture in my arm that put me out of commission. I spent the rest of the weekend being chauffeured down the lazily meandering river in a two-man kayak, a beer trailing in the cool wake. Not a bad weekend, by any means, but I was determined to paddle that damn river myself.

And so, I returned. And this trip more than made up for the last, not because I didn’t have fun the previous go-round, but because I earned it this time, dammit.

Return to the Colorado River

The first day started off pleasant enough. The river was as peaceful as I remembered, so peaceful, in fact, that I hardly had to paddle, but rather just steered my craft away from the occasional rock or towards a put-in where my camping companions had pointed out a hot spring. At Gold Strike Canyon, the scene of my injury from the previous trip, we gamboled in newly created thermal pools, snapped shots of Seussian flora spawning in the warm waters, and bathed in natural showers that cascaded off the rock walls.

On we floated. Cormorants skimmed the water yards from our craft, while swallows flitted in the crevices of the red rock walls that enclosed us on either side. Up above, the sky shone a bright blue, with the intermittent cottony clouds lolling by. Two miles downriver, and just over four miles from our launch point at the base of the Hoover Dam, we came ashore at Arizona Hot Springs, where we luxuriated in a sandbagged bath with several other groups who had stopped for the night. The sun was high. The sky was clear. We couldn’t have asked for a better weekend.

That is, until we awoke the next morning, our bodies and sleeping bags covered in a fine mist of grit from the winds that had picked up during the night while we were sleeping alfresco, without tents. When one of my companions spied the river, she wondered aloud why it was flowing in the other direction. The sight didn’t bode well. To top it off, my camera had run out of batteries, which meant not only would I not be able to snap shots the rest of the river portion of the trip, but I’d also have to go camera-free during the second leg, when we stayed in the uber-picturesque Valley of Fire. I cursed myself for buying an extra memory card rather than a battery.

There was no option but to paddle downriver, despite the fact that the unrelenting gusts of wind made it seem as if we were paddling upriver. Seven miles ahead lay Willow Beach, where we were to meet our outfitters by mid-afternoon. Bundled from head to toe in rain garments, we trudged forward, occasionally looking for bighorn sheep. Floating with the current wasn’t an option this time; if we broke stroke for even a moment, the wind and current would begin pushing us back almost immediately.

Several hours later, we spied Willow Beach up ahead. As soon as I saw our destination, my muscles decided to give in to fatigue. Although the stronger paddlers had offered to tow me at various points during the day, I was determined to forge ahead on my own steam. With no injury to hold me back, I didn’t have an excuse for a kayak chauffeur, nor did I want one. The last 200 yards or so were the roughest of the journey, but somehow I made it ashore, my muscles quivering.

As our outfitters loaded our crafts onto the trailer, I overheard a guide from another group tell his clients that it had been the roughest day on the river he’d seen in a long time. Knowing that made it feel as if I’d finally conquered the Colorado, having paddled enough for both my trips combined. And, damn, it was worth it. 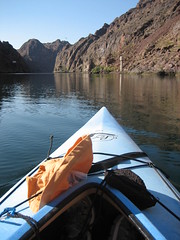 Have Kayak, Will Travel 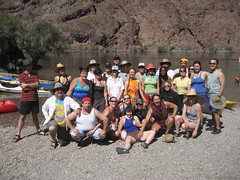 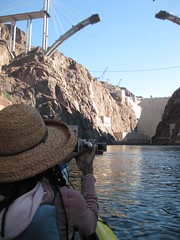 Bridge over the Hoover Dam (mid-construction) 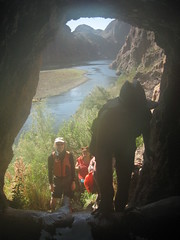 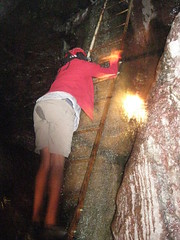 Climbing the ladder to the natural "jacuzzi" 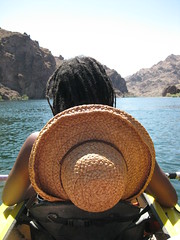 A very familiar view from my camp days 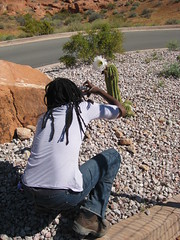 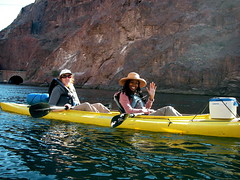 Kayaking with my PIC 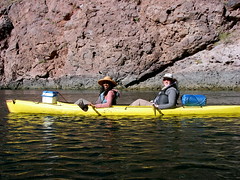 PICs on the Colorado River 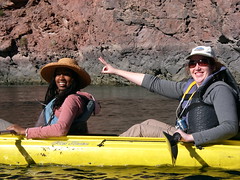 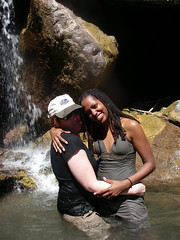 PICs in the hot springs 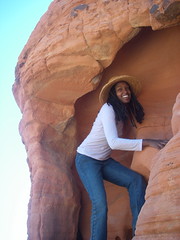 My PIC in the slot canyons 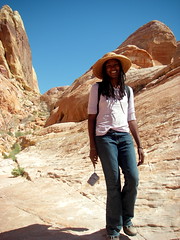 Ziedah in the Valley of Fire 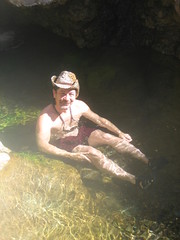 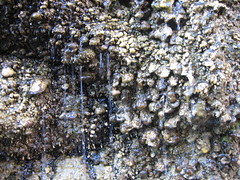 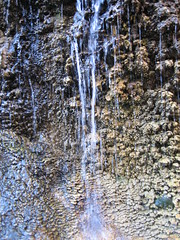 Waterfall on the Colorado River 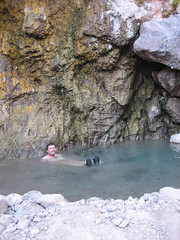 John in the hot springs

Steam rises from the ground 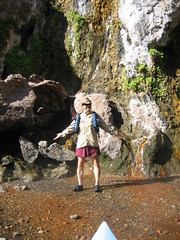 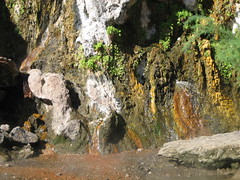