Alas, I’ve yet to make an Oscar speech, but I had my own version of glory today when my shark-diving article made it to the AOL Welcome Screen (once the “most valuable piece of Internet real estate,” as the Mother Ship told us drones, but I doubt it is any longer). When my Oahu shark article was published in the Seattle PI back in October, I receive a handful of kudos from fellow shark-ophiles and divers. But in the space of the last few hours, I’ve received several dozen emails from readers who happened upon the story of my Isla Guadalupe adventure, some of which have even made me blush. The responses have inspired me to write even more so than when I handed in my bound thesis last May.

To those of you who wrote, thank you. It really meant a lot to hear your kind words and to share your shark-encounter tales and fantasies. I’ll answer some of the FAQs here, short answers first:

A. Call Patric Douglas, the CEO of Shark Diver. Tell him you’re my pal and he’ll treat you all nice-like. Heck, he’ll treat you well even if you’re not my pal. He’s just that kind of guy.

Q. How long does a trip like [the one you wrote about on AOL] take?

A. It was a five-day trip — roughly 14 hours to the island and back, then three full days off the coast of Isla Guadalupe, where we were anchored most of the time. We never went ashore, even though it was a shell’s throw away.

Q. How much does it cost?

A. You can get the 411 on the Shark Diver site. Yes, it’s more expensive than a one-day trip to the Farallons, but the visibility is better, the water’s warmer, and the camaraderie of a live-aboard can’t be beat. Meals (and alcohol!) are included, and the galley crew served some mighty good grub. (They even catered to my vegetarian needs and exceeded expectations.) Oh, and it’s the trip of a lifetime, so charge that card and don’t give it a second thought.

Q. Do you need a special certification for this trip?

A. Even non-certs can go. It’s not tank diving, but rather hookah diving — you breathe through a hose that goes up to the boat — and you’re never more than 15 feet deep. The hookah apparatus means you don’t have to carry all that gear on your back, making it easier to maneuver in the cage.

Q. Was Isla Guadalupe really better than the Farallons [off San Francisco]?

A. I’ve never been to the Farallons, so I can’t give a truly informed answer. However, there was at least one diver on my IG trip who had been shark diving there and he raved about the conditions of Guadalupe: warmer water, better viz, and — most importantly — more sharks. If you’re interested in a good read about the Farallons, check out The Devil’s Teeth, Susan Casey’s beautifully written account of her time on these desolate islands. (Among other chestnuts, Casey drops amid her prose such mind-boggling nuggets as the fact that sharks are older than trees. Trees, dammit.) I took the book with me on this trip, and when I wasn’t underwater, I was usually holed up in my bunk with my nose buried deep in its musty pages.

Q. How do I become a freelance writer?

A. Good question. I’m still trying to figure that one out myself. I’m actually a freelancer and full-time editor, but my love of writing has me constantly on the lookout for other outlets. If you really want some quick advice, here it goes: Come up with a killer idea. Query a publication. Get rejected. Find another publication. Get rejected again. Come up with a better killer idea. Query again. Take up papier-mache as a hobby to recycle all your rejection letters. Query again. Just don’t stop trying. Some people will get your writing, while others… well, some people just don’t have taste, do they?

Honestly, I don’t think I could be a full-time freelancer. I just don’t have the patience for querying. But as a side job, it’s quite fulfilling, especially since I can focus on the writing and not where my next paycheck will come from. I know plenty of people with the stamina for full-time freelancing; I’m just not one of them.

Q. Weren’t you scared? Or do you just have a death wish?

A. When I was younger, I was a tad more daring. Now that I’m older, my invincibility has a few chinks in the armor, so I’m much more cautious than I was in my salad days. I haven’t jumped off a cliff in many a year, and I have no desire to relive my ambush in ‘Nam (true story), but I’m still up for some adrenaline-inducing action quite often.

At Guadalupe, I was one of the first in the cage — partly because I was excited, but mainly because I was green with seasickness after our overnight crossing and I knew the cool water would ease my pain. We didn’t see any sharks on that first dive, possibly because I scared them away when I chummed up the water. Yes, your dive instructor wasn’t lying when they said you can vomit in your regulator with no problem. (Thank you, Patric, for erasing that bit of footage.)

When the sharks were around, I was too in awe to be scared. When you know your time with them is finite, you don’t want to waste a second shrinking into the corner of the cage. I don’t remember anyone chickening out at the last minute. In fact, we were usually fighting for rotation spots. Sharks are fantastic creatures, and seeing them up close only makes you appreciate them more.

Q. What was your first trip with sharks?

A. My first underwater encounter was roughly six years ago during a night dive in Turks and Caicos. I’d gone for a little R&R and was talked into taking the Advanced Open Water PADI certification by several other diehard divers at the Club Med where I had holed up for a week. Little did I know that the advanced course required a night dive, something I’d never imagined I’d do. I’d been afraid of dark water ever since my brother threw me into our pool on a pitch black night after telling me that the bottom opened up to the ocean after the sun went down. (Yes, for those who’ve heard the tales, this is the same brother who handcuffed me to a coffee table. I have only one. Thankfully.)

But I didn’t mention my fear to my diving classmates, and when I jumped into the water that night, a glowstick affixed to my tank, I was certain I’d never surface again. Once I was under, however, with the pod of divers glowing like underwater stars around me, I lost all fear. I became mesmerized by the celestial lights of their own neon glows, caused by their own glowsticks and the bioluminescent organisms swirling in the Caribbean waters.

I did the prerequisite course requirements — underwater orientation and the like — then followed my instructor as he led us through a coral maze. It was there that he spotted what I believe was a five-foot nurse shark resting on the sandy bottom. When his flashlight beam hit the shark’s face, it took off, heading straight towards me. I froze. But a foot before it reached me, it careened to the side, and its graceful sway made me forget my fear, so much so that I reached out and let my fingers trail along the last few inches of its body. If I’d had an endless supply of air that night, I might never have been coaxed back on the boat.

Q. So, you’ve done great whites. What could possibly be next?

A. Oh, there’s so very, very much more. As much as I loved my great white dive, my long-time dream has been to swim in the open with either a whale or a whale shark. Ever since I saw one of the latter at the Osaka aquarium 12 years ago, I’ve wanted to swim alongside something as large as a school bus and as docile as a kitten. (Yes, I know there are dangers involved. I’ve just known some very aggressive kittens.) Patric’s company also offers a trip with giant squid (I don’t have enough dives under my belt for that yet, dagnabbit) and a deep-sub adventure to see six-gill sharks at 1,700 feet below the surface. Crikey! Oh, and there’s a slew of land-based adventures on my checklist, including a helicopter ride over a live volcano, which I’m planning for the fall.

Q. Do you have any more photos?

A. Heck, yeah! That wasn’t even mine on the AOL article. See below or check out my YouTube shark playlist.

Well, it’s past my bedtime on a school night. Must go… procrastinate more. 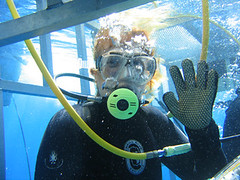 In the Shark Cage Off Isla Guadalupe 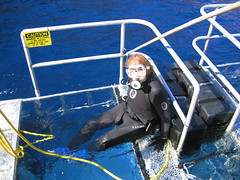 Am I really doing this? 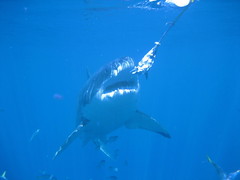 Shark goes for the bait 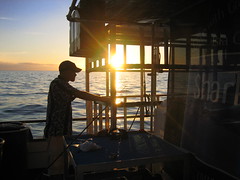 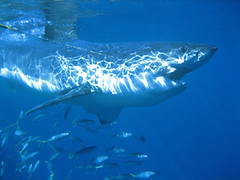 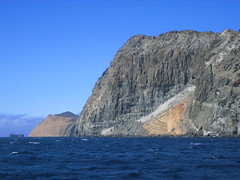 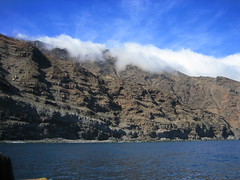 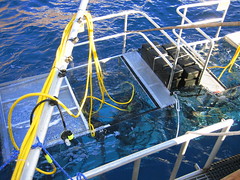 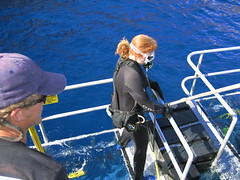 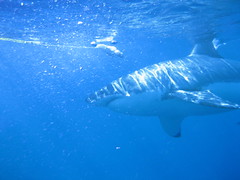 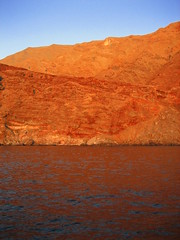 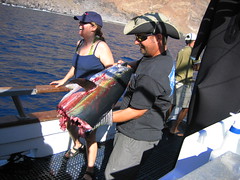 Half a Tuna, Courtesy of a Great White Shark 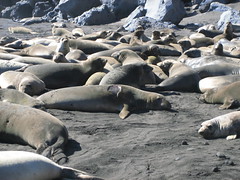 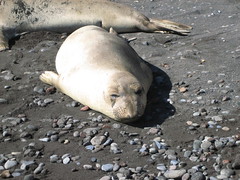 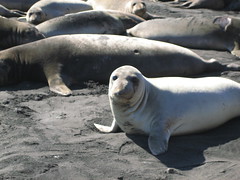 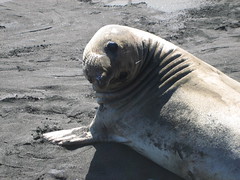 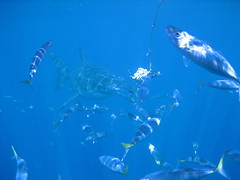 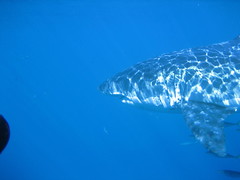 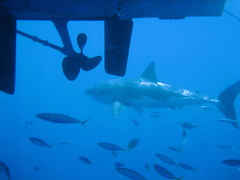 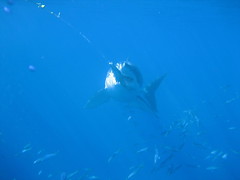